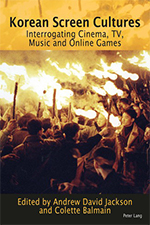 The "Korean Wave", or Hallyu phenomenon, has brought South Korean popular culture to the global population. Studies on Korean visual culture have therefore often focused on this aspect, leaving North Korea sidelined and often considered in a negative light because of its political regime. Korean Screen Cultures sets out to redress this imbalance with a broad selection of essays spanning both North and South as well as different methodological approaches, from ethnographic and audience studies to cultural materialist readings. The first section of the book, «The South», highlights popular media – including online gaming and television drama – and concentrates on the margins, in which the very nature of «The South» is contested. «The South and the North» examines North Korea as an ideological other in South Korean popular culture as well as discussing North Korean cinema itself. «The Global» offers new approaches to Korean popular culture beyond national borders and includes work on K-pop and Korean television drama. This book is a vital addition to existing scholarship on Korean popular culture, offering a unique view by providing an imaginary unification of the two Koreas negotiated through local and transnational popular culture flows.